Making it in the Gobi Desert

The driver steps even harder on the gas pedal. No matter that we’re driving on a dirt track in the middle of the desert, or that we’re racing alongside a hill tilting the bus in a 20 degree angle. A good guess is that we’re reaching 80 or so km/h.
A few minutes ago, we spotted another minibus driving south through the Gobi Desert and our driver was eager to catch up with it. This has clearly challenged the other driver into a suicidal competition between the two, about who’s Mongolia’s best (bus) rally driver. 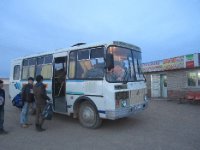 Our bus has left the main dirt track in the effort to overtake the other bus, something that seems to pay off… until a sudden bump sends the bus airborne. Not just a little, the entire bus is mid-air – still in a 20 degree angle. We land on two wheels only and for a split second the bus dangerously balances on those two wheels, continuing its fast forward motion, before finally deciding to stabilise on all four wheels instead of its right side. 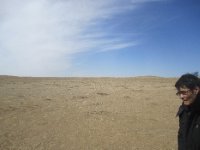 
After a few rather unadventurous days in Mongolia’s capital Ulaanbaatar I’m on a more action-packed 15-hour bus ride south, 550 km into the Gobi Desert. Destination: the South Gobi capital of Dalanzadgad (DZ).
Just an hour into the ride did the bus puncture, four hours in did the first elderly people throw up because of driving sickness, and now – about half way through – we were nothing more than share luck from flipping the bus over. And I absolutely love this ride - honestly!
The day I don’t will be the day I stop travelling. It’s dangerous and miserably. At the end of it all one’s internal organs have been shaken into a human smoothie by all the bumps and my spine has been rearranged several times. But it’s the only means of transportation for the locals and the backpackers alike.
It’s worth it, not only because of the awe-inspiring views of the endless desert, but more so because of the camel milk, Chinese sniffing tobacco and the experiences of the ride you share with the locals along the way. All of whom absolutely loved that I’ve brought Marco Polo’s book, Travels, with me to kill time. Obviously it was to bumpy to get any reading done, but passing it around to my fellow passengers and receiving big smiles and thumps up, made it all the more than worth it! 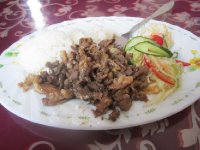 Arriving in DZ the search for a place to sleep and some cheap wheels to take further into the Gobi began. Despite being surrounded by some of Mongolia’s biggest tourist attractions the DZ has no tourist infrastructure whatsoever. A bunch of hotels, mostly addressed to mining big-shorts, no western styled cafés, no tourist information and no tour companies. The city is thus a welcoming challenge for anyone on a budget. 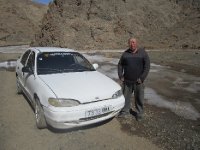 It gives the independent traveller two choices: Being proactive, asking around for the stuff you need or sit around and hope the stuff you need, will find you. The asking around often gets stranded in misunderstandings. E.g. if I ask for a cheap place to sleep they’ll point me to the nicest hotel in town because western tourists usually stay there. However if you just hang around the bus station, market or jeep-stand looking like the confused white guy you most likely are – someone with a little bit of English, knowledge of the most visited sights and the hope of doing a bit of business will show up. Often sooner rather than later.
And sure thing, at right next to the market a taxi driver stops and asks if he can take me to the nearest place of awesomeness; Yolun Am – an ice valley squeezed inside a mountain range running through the desert. 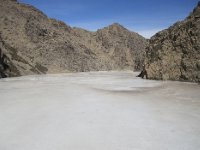 I’m still more concerned about my sleeping arrangements and ask if he knows any cheap hotels. Not surprisingly, he rather wanna talk about him driving me to the valley. I fend him off by getting his telephone number and say I’ll call him tomorrow if I find some people to share the costs with. I should note that this is a good trick not only to fend sellers off, but also to make them quote a reasonable price, because they don’t want somebody else to make you a better offer later on. 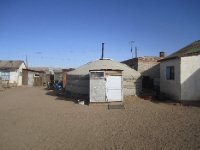 He then happily starts calling up someone, when we resume to the topic of where I’m going to spend the night. After talking in Mongolian for a bit he hands me the phone. On the other end is an American Peace Corps volunteer named Joe who tells me that the driver doesn’t know any really cheap places, but that I’m welcome to sleep at his place for 10,000 Tögrög (6 dollars) if I can’t find anything else. So I waved goodbye to the driver and instantly stopped my search for a bed – homestays are way more interesting than shitty hotel rooms.
I spend the rest of the day doing nothing*, and doing this I accidentally run into Joe. I’ll end up hanging out with him for a while, only interrupted by me spending an hour and a half waiting for the bus from UB to see if there are any other travellers I can share my costs with. There aren’t. 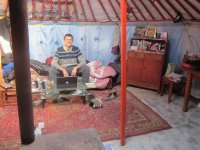 Dusk arrives and for better or worse Joe, I and a couple of the Mongolians go out for a few cold ones. When we finally try calling the driver there’s no responds, but Joe is quick to offer me the spare bed in his ger (traditional Mongolian tent) and I happily accept. Things just magically tend to work out when you’re travelling around alone.

I went with Tumee (the driver) to the ice valley the next day, which were indeed awesome, for an unheard of 40 $ (tourists tend to pay around the double); spending another night in the ger; helping out with an English conversation club the Peace Corps runs for locals interested in learning English; and finally made my way to the north-Gobi town of Mandalgov where more awesome Peace Corps volunteers have taken me in. 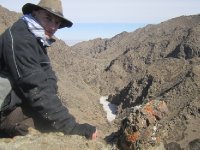 *"Doing nothing" in a Gobi city of 14.000 consists of hanging around in the park (when the dust storm settles down), visiting the mall or the internet café, drinking tea or eating at the small eateries, watching some kids practicing a performance at a local theatre and playing ping pong with some locals (running into Joe).