Where horse-rides; hospitality; vodka; and bus break-downs are found in abundance.

I’ve never been on a horse before. Actually, that’s not true, but I don’t really count the pony rides on Danish funfairs fifteen years ago as horse riding. The fact that a Dutch guy I arrived in Ulaanbaatar with had spent a week in hospital after falling from a horse should be warning enough. But neither sound reason nor functional brain activity has prevented me from insane ventures on my past travels, so why should it now? After all, I am in Mongolia, the land of great horse-riding empires such as the Huns and Genghis Khan’s Mongols.
So I teamed up with a former Australian journalist, Simon (24), and a Swiss herder, Joe (21), and headed for Dadal, the legendary birth place if Genghis himself. 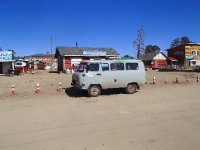 First phase of stepping in the footsteps of the Great Khan was to actually get to Dadal 525 km northeast of UB. It’s nothing more than a village, so no regular buses drives there, instead we had to go to UB’s main market from were a private jeep or minibus would leave whenever the driver thinks he has enough passengers or goods. It’s a rather simple waiting game, and there’s no way to speed it up, but surprisingly did we leave an hour passed noon, after only a few hours of waiting. 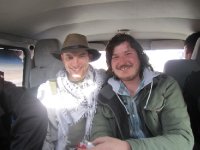 Simon and me in the bus

The drive justifies the proverb “It’s not about the destination, it is about the journey” to its fullest. First of all we are driving in an old Soviet minibus, like none you’ve ever seen. It normally seats six passengers in two rows of three facing each other. Given that this would be way too comfy and give the diver a lower income we were seated five on each row. Second, as soon as we’re out of the market’s parking lot does one of the local blokes – a long haired, fifty year old ex-hippy pass beer around to everybody in the bus. Promising start!
Soon after is the first of an uncountable number of pit stops, in where we stash up on beers for the ride. Simon gets a bottle of vodka as well, Joe gets two. Maniacs. Back on the bus, both are beaten in the honourable sport of ‘getting most drunk on the bus, shortest after we’d begun driving’ by the ex-hippy named Gantumur. Magically from his inner pocket appears a bottle of Genghis vodka. A cup is crafted from the bottom of a plastic bottle and the vodka is gone in no less than six – I repeat SIX (!!!) – shots. Big cups make for big shots and all the six of us participating just manage to get one before the bottle was all but empty. 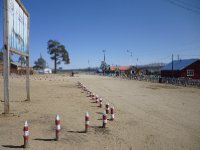 The drinking continues, but with me – as the only one realising that we’d arrive in a village in the middle of the night without a place to sleep – secretly taking a voluntary sober-ish duty for the rest of the night. That said driving though the endless steppes of Mongolia in an old Soviet piece of scrap minibus turned into a party-bus was no short of legendary.
We just manage to get there all of us – Simon being so drunk and annoying that treats to leave him in the middle of nowhere was made in all seriousness – 3.30 in the morning. Luckily we got dropped in front of a guesthouse and I manage to make sure the prize is fair before we crash into our beds, some more literally than others. 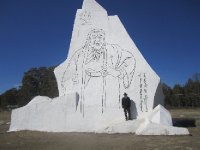 Next day is spent by enjoying the village’s country side, and we don’t really do much. With the exception of visiting a Genghis Khan monument marking his birth place and changing lodgings to a home stay with a retired math teacher I was tipped about. It is basically a bed and breakfast, but through in tea, conversations, a local source of knowledge and dinner – all for 8 dollars. It was tricky to find, if it hadn’t been for the handful of locals who basically followed us to the door and kept ringing up the owner when we arrived because he wasn’t there.
Oh, and Simon spent a considerable amount of time feeling bad about his behaviour on the bus, which the entire village knew about long before he got out of bed that morning. 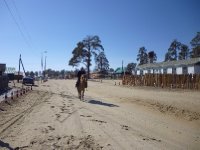 Second day was spent playing pool against a couple of locals, who soon arranged some horse-riding for us. Amazingly I manage to stay on the horse, which are half-wild here in Mongolia, even though I only had a couple of minutes training. 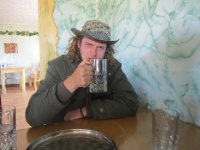 Afterwards we were treated to both vodka and a homebrew called Nermel, the latter taste of watered down petrol, but the locals love it, so we pretty much had to endure it. Calling it a night pretty early to go back to our homestay to nap it, we headed back to the pub around 8 pm. Only to find it closed, with the local police telling us to go back, if we didn’t wanted to get beaten up by drunk locals – it has apparently happened before. The village had no street light whatsoever and I’d doubt drunken locals would be able to find us. Personally I was a lot more nervous about gangs of wild dogs on the loose barking and snaring loudly at us from the dark just a few meters away. 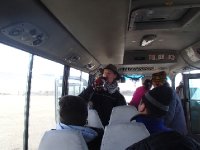 The 21-hour bus drive was almost more epic that the first. Twice are the bus stopped because locals spotted foreigners on the bus (that would be Joe, Simon and me), and wanted to share Nermel and beer with us. One of the guys even started pissing off the bus driver because he wouldn’t leave the bus. We got bogged once, had trouble crossing a frozen river and got lost in the dark at least twice. All before we arrive to the traffic chaos of UB’s rush hour. 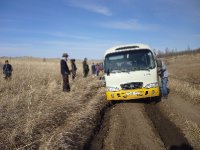 But no rest for the wicked, I’m off again, heading for Khovd in the west. A 48-hour bus-drive away… What are you doing for the next two days?